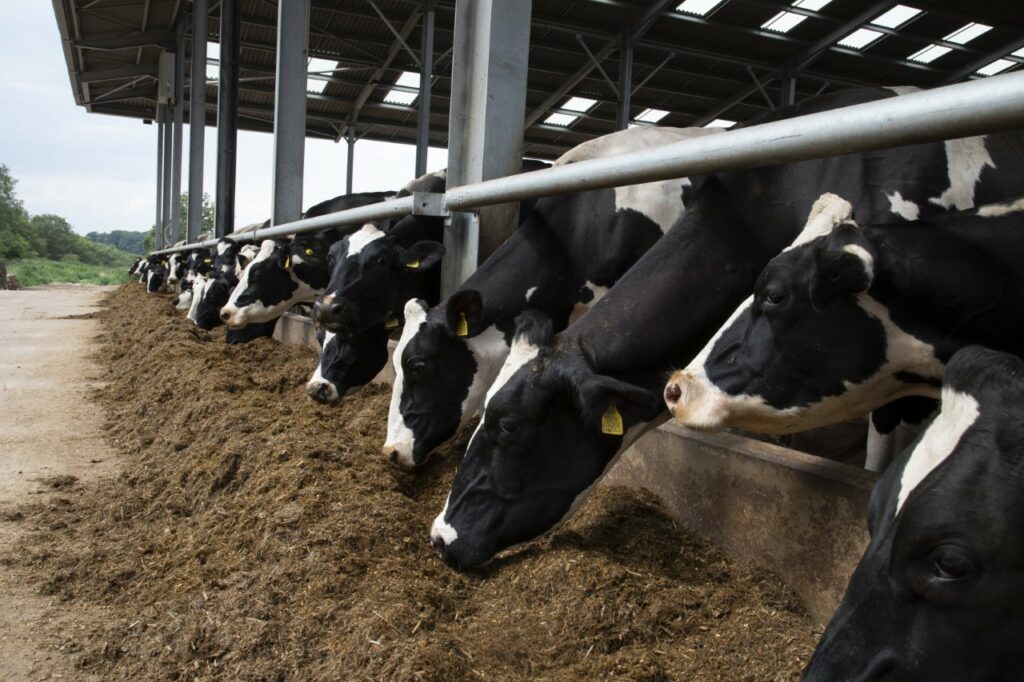 The first time I heard mid-lactation milk fever was in 2005. We got a call from a client in Hanford regarding half a dozen cows that went down. Most got up with a bottle or two of CMPK. But some had to be euthanized. Luckily we have a senior partner that has seen almost everything. Since it was a Jersey herd he suggested I take a look at the TMR. Most likely it was being sorted. It looked horrible – the dairy was trying a new mixer that was totally inadequate for a diet with alfalfa hay. The dairy went back to their own mixer and within a few days the diarrhea, the down cows, and the loss of milk were all improving. It wasn’t until the latest case of mid-lactation milk fever hit that another aspect of this problem became apparent.

Calling it milk fever often results in incorrect actions being taken. It is important to identify why they go down. Just immediately jumping to “calcium is deficient in the diet” usually ends up with getting the wrong answer. It is often a mineral/electrolyte imbalance, with magnesium (Mg) and potassium (K) more likely involved. The latest incidence of this happened on a mixed herd, with Holstein and Jersey cows going down. The dairy milks about 4,000 cows. Over the previous week 22 cows had gone down; definitely more than usual. A few cows responded to calcium but more got up after receiving potassium. Which would mean potassium is deficient in the diet – this has been the historical response. However, we wanted to dig deeper into the underlying issue. Because potassium metabolism would indicate that it is relatively hard to underfeed this macro-mineral. This newsletter illustrates how we troubleshoot nutrition related problems to get the right answer.

Potassium requirement under ideal conditions is 1.0-1.2% in the diet dry matter; for mature cows making about 90 lbs ECM. Under most conditions the basal diet we will be over 1.2%. During summer heat stress in CA, it is common for us to be at 1.7% K or more. The diet for this herd is 1.44% K. Another way to look at nutrient requirement is how many grams per day are required. Two hundred fifty grams of K would be required. This quantity of K should easily be consumed at only 40-42 lbs of dry matter. So at the estimated average intake of 48-50 lbs, we are supplying more than adequate amounts of potassium per day.

Now back to the investigation of this case. We had to ask lots of questions to uncover a pattern to the cows going down. The intent was to identify why too many cows were going down between 120-300 DIM. No first lactation animals were impacted. Three were second lactation, 12 were third lactation, with 7 cows 4th lactation or higher. This distribution wasn’t surprising. What was of interest was the high incidence of diarrhea reported by the herdsman. Our observations didn’t indicate bad manure but we kept this in mind as we conducted our investigation. A couple cows had E coli, which often presents as down cows. After the questions and observations were done we began to rule items in or out.

As soon as practical it is a good idea to get potassium up in the diet. This can be relatively easy, and inexpensive with potassium chloride. This is definitely a band-aid as the diet is likely adequate except for an intake problem. Until the underlying reduction in intake can be alleviated it is best to bump the nutrient that may be deficient.

Proper investigations are required. Making assumptions too early in the process usually results in getting the wrong answer. The challenge may go away, but the underlying issue remains. For example, another dairy reported a similar scenario a couple of months ago. They milk about 3,000 in open lots. About 20 cows were reported as having gone down. The investigation uncovered a lapse in footbath maintenance resulting in a surge in heel warts and foot rot coming out of the summer heat. These lame cows under consumed the TMR due to pain overwhelming the drive to eat.